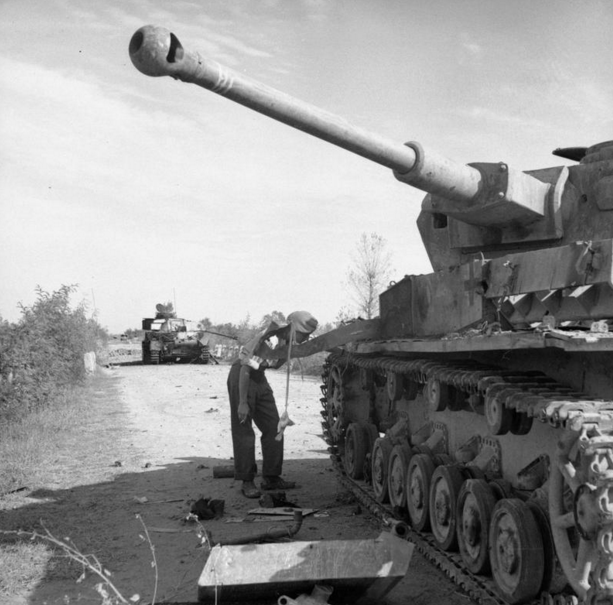 The Gothic Line (Gotenstellung in German, English Gothic Line) defensive line was established by German Field Marshal Albert Kesselring in 1944 in an attempt to slow the advance of the allied army commanded by General Harold Alexander to northern Italy. The defensive line stretched from the province of Apuania (current Massa and Carrara), to the Adriatic coast in Pesaro, following a front of over 300 kilometers on the mountains of the Apuan Alps continuing east along the hills of Garfagnana, in the Apennine mountains Modenese, the Bolognese Apennines, the upper valley of the Arno, the Tiber and the Apennines Forlì, where he distinguished body of Polish volunteers. Only in the eastern sector of the line, in the summer of 1944, there were 3,604 trenches, 479 anti-tank emplacements and mortars, 2,376 machine gun nests, 16,000 positions for snipers, nine kilometers of anti-tank ditches as well as 120 km of cross-linked and 95,689 mines anti-personnel and anti-tank. It was not neglected the tactical organization of the line and was applied by the German method of “defense in depth” using a system of bands fortified in succession, some kilometer deep, depending on the conformation of the ground. This system proved very useful to contain attacks allies for many months. No coincidence that one speaks of the Gothic Line (Green) I and II, just to distinguish the first from the second line, placed an average of about twenty kilometers north of the first, well organized defense in the Adriatic and with a vague trend in Apennine sector where it will be reconstructed continuously by the Germans, taking advantage of the long time granted by the slow allied advance.

The Allied landing in southern France (Operation Dragoon) took place August 15, 1944, meant that some departments Allies in Italy were moved from the front to be merged with the necessary forces landing in France. The entire French Expeditionary Corps made up of four divisions colonial trained to mountain warfare, three American divisions of the 15th Army Group commanded by General Harold Alexander were then removed from the Italian front. Before the attack on the Gothic Line, the Allies were then calculated in 19 infantry divisions and five armored divisions, plus three divisions of reinforcement, but the need to re-coordination of allied forces gave the British XIII Corps commanded by General Sidney Kirkman and composed of the 6th Armored Division, the dall’1ª by the 8th Indian Infantry Division Indian unit supported by an armored brigade from the 78th Division and later Canadian English, the 5th Army under General Mark W. Clark was unguarded. The 5th Army, remained heavily unguarded, were also part of the second and fourth body, controlled respectively by General Geoffrey Keyes and Willis D. Crittenberger, to which were added in September the 6th South African Armoured Division and the Brazilian contingent of the Brazilian Expeditionary Force, in October, the 92nd Infantry Division of the US, and in November the 10th Mountain Division always from the US While the western sector from the Tyrrhenian Sea to Florence was held from the 5th US Army, the eastern sector was instead under the control of the 8th British army under the command of Sir Oliver Leese, which included the X Corps under General Richard McCreery, the V Corps under the command of Lieutenant General Sir Charles Keightley which included no less than 5 divisions ready to move towards Bologna and Ferrara, and that which will later be added to the New Zealand 2nd Division and a brigade from the Greek mountains. Finally, there were the Canadian Corps and the Polish II Corps, concentrated in the area between the Apennines and the Adriatic Sea, the first under the command of Lieutenant General Eedson Burns and directed towards the hills west of Pesaro and the second led by General Polish Władysław Anders with the task of occupying the high ground to the north-west of Pesaro. As for aviation, for the Allies complete air supremacy was secured by about 2,900 aircraft supplied to the two Allied armies that attacked the Gothic Line.