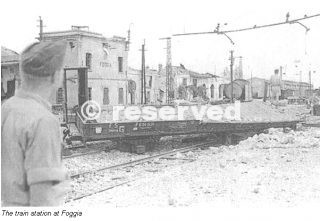 In May 1943, the Anglo-Americans decided to take the offensive to be able to land in Italy. To achieve this they had to render harmless the Foggia airfields, essential to have control of southern Europe and the Mediterranean. When they started the bombing of Foggia, it was a few days to the fall of fascism and a few months to the signing of the armistice of 3 September at Cassibile, but Foggia will also bombed on September 18. The Anglo-American bombers, departing from the airports of North Africa, then took aim at the airports Foggia, implementing the tactic of carpet bombing on the city of Foggia, allowing them to be even more convincing. Citizens Foggia was not even spared the criminal strafing by enemy aircraft

After the first disastrous air raids, the city of Foggia began to be abandoned by civilians who could do it. Instead stayed on site a large number of civilians militarized as railway workers, postal workers, health workers, firefighters, etc .; the offices of civil territorial government were transferred to safer centers, and when, at the end of September 1943, the Allies entered in our city, they found only destruction.

The captains just conquered, the Allies made a huge airfield and a springboard to win the Second World War.

The Office of Civil Engineers determined that 75% of existing rooms in the bombing were destroyed or uninhabitable as of 1 January 1947.

List the most important raids, the estimated number of victims must be accepted with caution: